Well, I have had the Porsche Cayman GTS for a little over 6 months now, and it is time to give it an evaluation.  During this time, I have driven it 4926 miles (7927.66 kilometers).  Due to the date that the car was actually last serviced by the Porsche dealer prior to my purchasing it, I have also had its first major maintenance service done which included an oil change and cabin air filter system changes.  I got a terrific deal on the 2019 Cayman GTS as it was a model year old when I purchased it last March – thus the need for a service already.

In short, I love almost everything about the car.  The Cayman and I got an unusually fast “get to know each other” period as I ended up having to take it on a trip to southern Utah in March to visit with some of my clients who live down there.  March in Utah can be quite interesting weather wise as we can get everything from warm sunshine to serious winter storms.  I had planned on taking my Ram 2500 truck on the trip due to a possible winter storm near the end of my scheduled trip.

Well, that changed.  I was about 8 miles from home heading down I-15 when my “Check Engine” light came on.  After uttering some serious profanity, I made a turn around at the next exit and headed back home.

I quickly repacked everything into the Cayman and was quite surprised at the luggage space.  I was taking a large load of cat food to Best Friends Animal Sanctuary in Kanab to donate to them.  The food was leftover from Rajah when he passed in January.  So, I not only had my normal gear for a 5-day work trip, I had quite a bit of cat food.  I placed my large travel duffel along with a small backpack, extra boots and extra water in the rear hatch with everything else.  Oh, I also had my camera gear in the rear hatch as well.    Of course, the cat food was packed in the front trunk as was some cold weather gear.  Including food to cook breakfasts in the front trunk, which I call a “frunk”, there was plenty of room to spare.  So, if you ask me if the little Cayman has enough space for a real road trip, I will give you a resounding “yes”.

With the 18 way optional sports seats, the car is incredibly comfortable.  Finding a nice driving position is easy, and there is plenty of lumbar support for those of us with less than stellar backs.  The cabin’s ventilation system is really nice with plenty of airflow and it is easy to keep the hot, dry heater air off of your face.  The rear hatch has a built-in defogger/defroster which worked flawlessly when I got into cold rain and some snow – yes snow.  All of the controls are quite easy to reach and most are fairly intuitive.

One cabin feature that I really grew to love is the center console’s entertainment/information screens.  It is simple to set-up some custom screens, and they are easy to access.  I really love the built-in compass/altimeter.  Why?  In questionable weather, the altimeter and outside temperature gauge allowed me to plan and navigate some alternate routes to avoid unnecessary high mountain passes.

From a day-to-day usability standard, the Cayman GTS is nicely livable.  It rides comfortably even over rough roads.  The suspension is super tight without being jarring.  So, again is this a car one would want to take on a long road trip?  Absolutely!  And, we haven’t even gotten to the best part of the car – its performance capabilities.

OK, does the Cayman GTS actually live up to the high-performance sports car standard?  Oh yeah!  The Cayman’s real on the road acceleration is astonishing.  The car pulls higher acceleration G-force on its gauges than my Hellcat Charger did.  At full throttle in “Normal” mode the acceleration is very quick.  In “Sport” mode, the acceleration off the line is quite astonishing.  The car snaps your head back into the seat and just goes.  Passing from say 60 miles per hour (about 100 kph) is a breeze.  Push the pedal down, and that Porsche PDK 7 speed dual clutch auto transmission kicks down instantly, and you have furious power to pass. 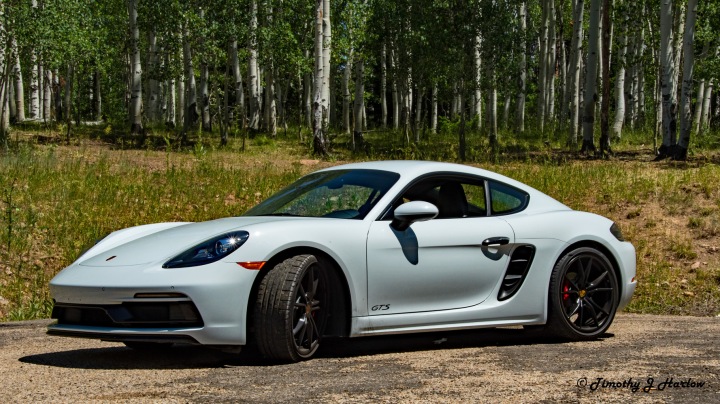 On one stretch of open highway this summer I was attempting passing a really long camp trailer rig and another camp trailer rig, one in front of the other.  I wanted to make sure I got around quickly, so I put the pedal to the floor.  By the time I cleared the second camper rig, I was going 122 mph (196 kph)!  That was in just a few seconds.  If you put the car in “Sport +” mode, acceleration is simply brutal.  You are pushed back into the seat, and the car just launches.  70 miles per hour (113 kph) is just an eye blink away.  Yes, that 2.5-liter turbocharged boxer 4 is a ferocious engine, and the PDK transmission is almost intuitive in its shifts.  In street driving, I have lost nothing by jettisoning the Hellcat.

Can it handle?  Like it is on rails.  The Cayman GTS turns with astonishing quickness and precision.  The road holding is amazing.  The car feels like a supercar when you put in a twisty highway.  With the light weight, mid-engine, relatively short wheel-base and Porsche’s PTV (Porsche Torque Vectoring) system, the car just turns exactly where you point instantly.  There’s no understeer plowing, and the rear end stays compliant in aggressive cornering without wanting to come out.  The balance is incredible.

The one thing that I really began to dislike about my Dodge Hellcat Charger was that the power was simply too much for the chassis.  The car was an incredible brute, but it just wasn’t balanced, and with that hellacious power and torque, you always had to be on your guard.  I am certain it would have been a blast on the dragstrip, but alas that never happened for me.  I was warned by a couple of knowledgeable friends that the car needed drag radials to be safe on the dragstrip.

The Cayman GTS has none of that.  The car is perfectly balanced in all ways.  The tires can handle the acceleration and torque.  The chassis is nimble and graceful.  Everything works together as one perfectly engineered system.

The list is short.  I think the cupholders are not befitting of a $100,000 fine automobile.  Yes, they work fine, but they just seem a little cheesy.  The car has no spare tire.  I got to experience the joy of a super low car with no spare first hand a couple of weeks ago.

I was on my way home from Salt Lake City when I hit something in the road.  Moments later the warning screen popped up with “left rear tire down 36 pounds”.  She was flat as a pancake.  Fortunately, I was right next to a large parking area when this happened, so I just pulled in.  The car handled the flat without even a bump.  Porsche gives you a can of gooey stuff and an air pump.  I followed the directions carefully, and I got nothing.  The hole was too big for the goo to seal it.  (It left a mess in the parking lot.)

I am a AAA member, so I called and told them what happened.  And I mentioned that I would need a tow due to the tire damage.  I was only 4 miles form the Porsche dealer where I purchased the car.  It took me 4 hours to get there!  AAA wouldn’t tow me because the Cayman GTS is so low.  The GTS sits about 1 inch (25 millimeters) lower than a base Cayman.  The car is ridiculously low, only 4.5 inches (12 cm) off the ground.  Fortunately, the Porsche dealer has a towing service, so I got the car there with no issues or damage, but it just took a long time to get everything set-up.

So, while the low ground clearance is a definite performance plus, it is also a total livability minus.  My solution.  I bought some tire plug kits to keep in the car along with the goo and pump.

The Cayman GTS is a fabulous machine.  It is definitely practical to use on a road trip.  The thing gets great fuel economy as well as being comfortable and a total blast to drive.  Let me put it his way.  The car is so totally cool to drive that just getting in makes me smile.  With the GTS package, you have a track car that is also a phenomenal road car.  But just be prepared for a few low clearance issues.  Extra care is required for entering and exiting many driveways and a few intersections.  Towing is going to be a difficult proposition.  So, keep that in mind.

However, in the total context, this Porsche 718 Cayman GTS is one absolutely amazing automobile.  The GTS model is in my opinion the best of the Cayman/Boxster models.  It has almost all of the track capability of the GT4, but it also has the street comfort and manners of the S series.  The Cayman is a driver’s dream.  You have 4-cylinder economy with 8-cylinder performance.  Am I happy with purchase, and would I but the car again?  Yes, yes, yes!!

I hope the car lovers enjoyed my review of the Cayman GTS.  And I hope I haven’t bore the rest of you to tears.

Well, thanks again for stopping by my blog, and stay safe out there.