A few years ago I was traveling back from a horse show in Scottsdale, AZ in February, and I decided to take a detour towards the northern rim of the Grand Canyon. I had been following US 89 North from Flagstaff, AZ back towards Salt Lake City. There is an alternate route, US 89A, which ends up at a small town in northern Arizona called Jacob’s Lake. From there one could go south to the North Rim of the Grand Canyon, or turn back north toward Kanab, UT.

I had left Scottsdale that morning watching a storm towards the northeast over Sedona. By the time I got towards Flagstaff, it was snowing like crazy, and I had pulled over for lunch. Let’s just say that Arizona drivers are not the best in the snow. Anyway, after lunch, I was headed north on US 89 and had decided to take that turnoff towards Jacob’s Lake to view some new scenery. That storm that had rolled through Flagstaff was pretty large, and it had been chasing me all afternoon.

Right after I made the turnoff onto US 89A, I was greeted with some really spectacular views. As I made my way towards Jacob Lake I kept pulling over to take photos of the incredible light. It’s not very often that one gets to just experience spectacular light at the head of the storm while on the road. Being February, I was trying to stay ahead of the storm because Jacob’s Lake is quite high in elevation, close to 9000 feet. Even though I was in my Jeep Wrangler, I still didn’t want to get caught in any blizzards. Yet the light was so compelling. Here are a few shots that I took that afternoon.

Bridge over Colorado River on US 89

Mountains near the intersection of US89 and US 89A 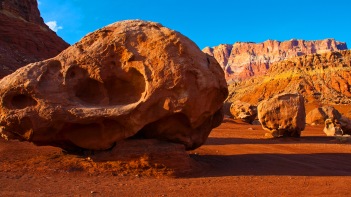 Weird boulders on US 89A