The Blue Mountains take their name from the bluish haze that usually hangs across the rugged, high peaks. The range is located in central Oregon.

I had a work trip scheduled to visit clients in Portland, Oregon and Seattle, Washington, so I had decided to make my work trip a little more enjoyable by seeing some sights and doing a little exploring. Those of you who follow me know that I really love the Pacific Northwest.  What a great excuse to see some new places.

I stayed in Baker City, OR the first night. As I was going to be gone for close to two weeks, I had decided to bring my camp trailer to save on lodging costs. So here’s a shot of my campsite in Baker City. 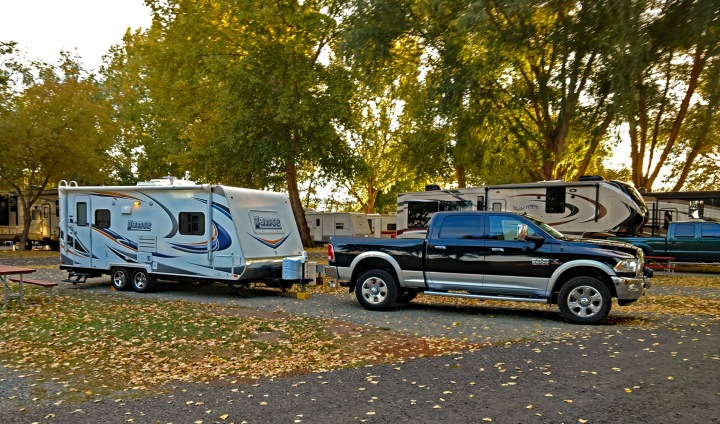 This little town sits right at the base of the eastern side of the Blue Mountains.  For you history buffs Baker City is on the Oregon Trail route which was one of the original pioneering routes to settle the Western United States in the middle 1800s. In fact, just out of town there’s a wonderful museum and national historic site dedicated to the Oregon Trail. If you’re ever passing through this part of Oregon, it is well worth your time to tour the museum and to walk some of the trails in the park as you will be walking in the wagon tracks from the mid-1800s.

The next morning I left the interstate highway behind and took to the back roads of rural Oregon right through the Blues. The route out of Baker City was Oregon 7, and it wound its way through the hills up into the mountains. Fall in the mountains of central Oregon can be spectacular with all kinds of colors. There is one tree in particular that is always an amazement to me; it is the tamarack tree.

The tamarack is a conifer, which usually do not lose their leaves, or needles. However, the tamarack is a special type of conifer, and the needles turn bright yellow in the fall like most deciduous trees. They’re quite undetectable in the forests in the summer months as they are the same color as any other conifer. But in the fall they are simply majestic.

As I proceeded farther up in the mountains, I came upon an interesting site. It was a turnoff leading to the Sumpter railroad. I decided I should go take a look as that railroad has been around since the later 1800s. It is now a restored tourist railroad, but everything was closed down for the winter when I got there. Nevertheless, I walked around and got a few pictures of the old depot and a couple of the railroad cars.

I looked at some information on the depot building, and there were a few special trains that were going to be running — one on Halloween and another the next Saturday as a fall color tour. Too bad I didn’t get here on another day.

Leaving Sumpter the road kept climbing, and I was afforded a great view of some of the bigger peaks of the Blue Mountains as I had crossed over onto the west side.

Eventually Oregon 7 merges with US 26 as it heads into John Day, Oregon. It was now time for a lunch break, and I found a great little family restaurant right in downtown John Day. I was even able to get a little parking area for the trailer. Heading west out of John day the terrain changes considerably, and for quite a while US 26 winds through rolling hills and farmlands. Eventually, the highway comes into some pretty rugged country near the Painted Hills on the eastern side of the Cascades. I didn’t stop here on this trip, but I did stop and take a few pictures of the canyon country along the John Day River. US 26 winds through the rugged terrain toward the higher country on the foothills of the eastern side of the Cascades.

As you can see from the photos this country is extremely rugged and the terrain is mainly composed of old lava flows. The Cascade range to the west comprises numerous volcanoes due to the joining of the Pacific plate and the North American plate just off the West Coast of North America. This area is known as the subduction zone, and as one plate pushes over another, the lower plate (the one that is being subducted) is pushed down into the mantle and heats up until the rocks turn to magma. This is what forms the volcanoes along the western coast of the United States and Canada. In fact, the whole area is known as the Ring of Fire, and it goes all the way from eastern Asia up across Alaska and down the West Coast of North and South America. The rocks you see here are remnants of ancient volcanic flows from the Cascade peaks, some of which are still active today.

I finished the day in a little town called Prineville on the eastern foothills of the Cascade Mountains. The next morning as I left Prineville and headed along US 26 towards Portland, I was rewarded with some spectacular scenery of some of the volcanic peaks in this part of the Cascade Range. Not far out of Prineville as I was heading up a hill, I caught a view of Mount Hood far off in the distance. And then as the highway wound around more, I could see Mt. Jefferson quite clearly off to the west.

The last leg of the trip was up into the Cascades and through the forests towards Portland. The Cascade forests are completely different from the forests of central Oregon. They’re considerably wetter and the vegetation is much different and much more dense. Where there are vast stands of tamarack trees in the mountains of central Oregon, in the Cascades they are quite rare. But here there are maples and other deciduous trees with brilliant colors.

I hope you enjoyed my tour of central Oregon and the Blue Mountains in the fall. This is spectacular country, and you just can’t see these things from the interstate highways. Sometimes the journey is worth more than the destination. One of these days I hope to have time to actually spend a few days in this part of the world, and get on the trails away from everything and really do some great exploring.

4 thoughts on “Fall in the Blue Mountains and Central Oregon”